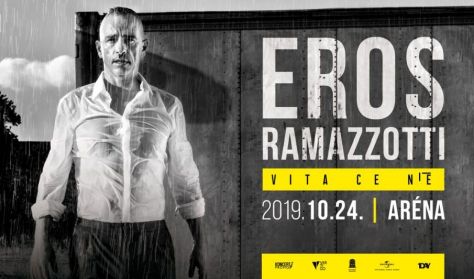 The Italian superstar doesn’t asseverate that he adores Budapest and the Hungarian audience only out of courtesy but also proves it: in 2019, he is preparing for his 4th live concert in Papp László Arena.  more

EROS RAMAZZOTTI IS BACK AGAIN IN HUNGARY WITH HIS NEW ALBUM

The Italian superstar doesn’t asseverate that he adores Budapest and the Hungarian audience only out of courtesy but also proves it: in 2019, he is preparing for his 4th live concert in Papp László Arena. Born in Rome, the singer and lyricist doesn’t belie himself this time either: in 2016, he entitled his 14th album Perfetto (Perfect) which became the name of the tour including Budapest, however, now he goes back to life where he feels at home.

Vita Ce N’èis an unique word-play that has surprised even the Italian, although it doesn’t change the fact that life exists and under no circumstances can we forget about that. The new album will be released 23rd November and the tour taking place in the finest arenas of the 5 continents starts in February 2019!

The new album released by Polydor Records will be launched andavailable in standard, deluxe, double vinyl versions (in a colored version as well) and a box set.

The most famous Italian artist has disclosed his return to music life through a digital campaign started on his social media websites. In co-operation with Italian Facebook, Eros Ramazzotti has become the first artist in Italy who announced his new album and tour using a debutant video premier tool. Besides, considering the development of the digital media in the world of music, Eros has decided to give the preordering rights of his upcoming world tour to Spotify: all Spotify fans will be sent an e-mail containing a link to preorder and presave. Tickets are available from 13th September. Fans can get the album in advance, „Pre-Sale” on Spotify is available from 11th September. Fans can buy the tickets 2 days earlier, while on Amazon all forms of the album can preordered. Vita Ce N’è will be available both in Italian and Spanish.

Eros Ramazzotti belongs to those few performers who are able to sing about life and love in a way that doesn’t seem factitious or arty, not even for a moment. One of the most well-known people of Italy believes it’s affection, love and life-affirmation that make the world go round, thus, no one will be surprised if they think his new songs are about these themes. Everyone will be astonished by his unique perfoming style!

“… for they were at hand, yet unreacheable, present, yet ungraspable …” (Krasznahorkai László)

Opera in two acts, in Hungarian, with Hungarian and English surtitles

Enjoy our online streaming services from the comfort of your couch!

Warning! The basket time limit is about to expire!