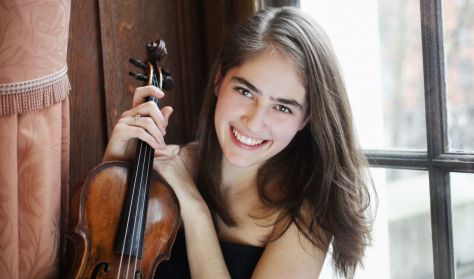 Beethoven and Brahms: two key figures of the Classical and Romantic eras promise a rich experience at this concert of the Hungarian National Philharmonic Orchestra and the Hungarian National Choir. In the first part, which consists of works by Beethoven, well-known instrumental pieces will be interspersed with short cantata treats. Of the five pieces, the inspirational role of German literature is an essential component of three of them. Brahms’s last symphony is both modern and a throwback to the past. The soloist of the concert will be an outstanding young Hungarian violinist, while, the distinguished Canadian conductor is a returning guest of the NFZ.

The Egmont Overture was written to accompany Goethe’s drama, and the rarely heard Elegischer Gesang is set to a short poem by Johann Christoph Friedrich Haug and commemorating the death of an earlier poet, Johann Georg Jacobi. The other cantata rarity in the programme, Meeresstille und Glückliche Fahrt, returns to Goethe by setting two of his poems to music, both of which also later on inspired Mendelssohn to compose a concert overture. In contrast to the vocal works, the two violin romances are absolute music, without any literary background. Interestingly, they belong to the most gentle part of Beethoven’s output: none of them contain any struggle or passion – just the serene singing of the violin. Brahms’s Symphony No. 4, with its excitingly modern features, returns to the seriousness of the Baroque era with the passacaglia of the fourth movement.

Julia Pusker, a graduate of the Royal Academy of Music in London, is a pupil of György Pauk, among others, and the concert's conductor, Keri-Lynn Wilson, is the pride of Canada and a graduate of the Juilliard School of Music in New York. She is now a respected interpreter of both the concert repertoire and operatic masterpieces in Europe and North America.

Although the concept behind the productions has always been a mature one, over the years the Ring has been rejuvenated…

Enjoy our online streaming services from the comfort of your couch!

Warning! The basket time limit is about to expire!