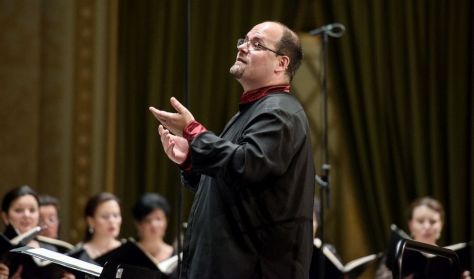 For the last concert in this subscription, we have assembled a bouquet of musical portraits of the saints.
Although Saint John Chrysostom, Saint Francis of Assisi and Saint Francis Xavier all lived in different periods in different parts of the world, the activities they engaged in were similar in many respects. Their common feature was disdain for luxury and their embrace of the cause of helping the poor. Just like these saints, the composers represented at the concert also pursued their various careers in very different eras and regions. Nevertheless, their faith meant that their creativity shared a common language.
It was in 1910 when the Russian Sergei Rachmaninoff crafted his unaccompanied choral work The Liturgy of Saint John Chrysostom, which fits into the liturgies of the Orthodox and Greek Catholic churches. "I had not written anything with such joy for a long time," he said.
French composer Francis Poulenc wrote his work for male choir Four Little Prayers of Saint Francis of Assisi in 1948. "All of my religious music turns its back on the style that is inspired in me by Paris and its outskirts.  This is evidence of heredity. Faith is strong in all the Poulencs," he wrote a few years earlier.
The Czech-born composer Jan Dismas Zelenka (1679–1745), who mainly worked in Dresden, came from a completely different world and was in direct contact with his contemporaries Bach, Handel and Vivaldi. His 1727 composition Litaniae Xaverianae is a massive Baroque work that holds its own when compared to other significant pieces from that era. Zelenka increases the work's sense of drama with his bold harmonic innovations. This is the first time the work is being performed in Hungary.
We will bring the legend of Saint Cecilia to life with a world première. Tamás Beischer-Matyó composed his work for mixed choir Lilium et rosa specifically for this concert based on a commission from Zoltán Kocsis-Holper. As the composer put it, "This choral work illustrates the episode in the life of Saint Cecilia when the angel revealed himself to her husband and his brother on her wedding night. The work depicts the moment of wonder when the two brothers – who previously did not believe in any kind of supernatural world – are suddenly confronted with the hitherto hidden dimensions of a different form of existence."
The end of the concert invokes the Virgin Mary. It will do so with Johann Sebastian Bach's song of thanks to the Holy Mother, his towering Magnificat. The work dates from 1723, not long after the composer assumed his post as cantor at Leipzig's Thomaskirche. It is an outstanding masterpiece of Baroque musical construction.
This concert will also serve as Zoltán Kocsis-Holper's concluding DLA doctoral concert.

Beyond the event
Jegy.hu Blog

Interesting facts, reviews and interviews to get ready for the experience!